Round one - me; Round two - Junior 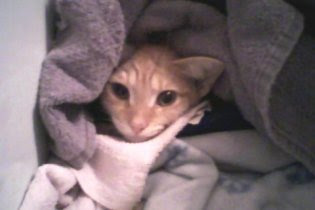 So he was fine Wednesday night out of the bathroom for about an hour. I even got to trim his front nails (which ended up coming in handy last night).

Anyhow, yesterday, I dropped the nuts off for surgery but they ended up getting bumped for some emergencies, so they will go back later. After picking them up, I got home and decided to try round two with Junior (I gotta change that name soon or it is going to stick). I wrapped him in his towel and went out to sit with him and watch everyone. Pecan hissed a little at him and Pistachio again had a hissy fit. He went nose to nose with Maestro and Tommy. Fine with Maestro but hissed a little at Tommy - which Tommy graciously ignored.

Well, I think I might have pushed him too far. At about the 90 minute mark, he got curious and was sitting on my lap watching the kittens. Something startled him and he took off. I spent the next 15 minutes trying to catch him. Around the condo...I was hoping he would duck into the bathroom and I would be able to shut the door, but no such luck. He went into the kitchen and in my overconfidence, I tried to grab him. Bad idea - he scratched me and bit my wrist. Entirely my fault. Then under the sofa. I managed to get him out and he went down the stairs to the front door. I took the towel and followed him. He was in the corner and I could tell he was freaked out. I tossed the towel over his head and he burrowed further underneath. We went back upstairs and back into the bathroom. I sat with him for a few minutes and he relaxed and was purring and looking at me with those cute baby eyes. <
Posted by Random Felines at 8:51 AM