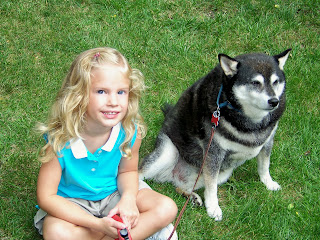 February 1997 to January 2010
Bandit was Rob's first dog. He had been looking for a while and saw a picture and wanted this breed. I guess it was better than the Malamute he originally wanted (until I told mom how much they shed and she shut Rob down on that one).
Rob found a breeder in Toledo and talked me into going with him. There were two 3 month old puppies. He picked the one he wanted and off we went. And about 30 minutes down the road, the dog threw up on me....thankfully we were near a gas station and we could exchange shirts. :)
Bandit was a great dog. Rob took him to college where he was very popular. In fact, the guys in his house took to walking him for Rob to pick up girls.
He lived with Rob and Abby until Lanah was about a year old. By that time Bandit was getting older and they were afraid he might unintentionally snap at her as she was using everything (including the dog) to pull herself up to walk. So Rob called our parents and they agreed he could come live with them.
Bandit wasn't feeling so well over Christmas and last week Mom had to make the decision to let him go. He earned his wings 1/8/10. I know there is another angel over Rainbow Bridge waiting for us.
Posted by Random Felines at 3:35 PM